US oil is suffering unprecedented distress, as demonstrated by the benchmark West Texas Intermediate (WTI) crude price crashing into negative territory. This is a “triple black
swan” of an oversupply of oil driven by Opec and Russia, COVID-19 demand destruction, and having nowhere to store it.

Oil traders reacted on April 20, the day that May forward contracts for WTI crude were due to settle. Many offloaded their contracts at any price to avoid taking delivery of oil they couldn’t store, and the May WTI price plunged to US$-37.53 (£-30.36). Now attention has turned to the June price, which is just under US$15, still the lowest in decades.
Though prices will rebound, the bigger question concerns long-term viability. US oil companies have feasted on a decade-long diet of rampant liquidity thanks to very low short-term interest rates and quantitative easing. With many able to finance and refinance drilling with a breakeven price of US$40 and above per barrel, this brought into play lots of
shale oil, whose fracking requirements are far costlier than basic onshore oil.

This tripled US oil production in the past decade to become world number one, overtaking Russia and Saudi Arabia. Around two-thirds is shale, which is now in big trouble. Of
the 16% of US companies that are “zombies”, meaning cash low doesn’t cover their debts, a good proportion will be in oil. Oil companies’ loans will be based on assumptions about
prices that definitely won’t include the current levels. Companies also finance themselves by issuing corporate bonds at the lowest investment grade. These are vulnerable to being downgraded to junk, causing borrowing costs to rise sharply.

US crude oil production in barrels per day 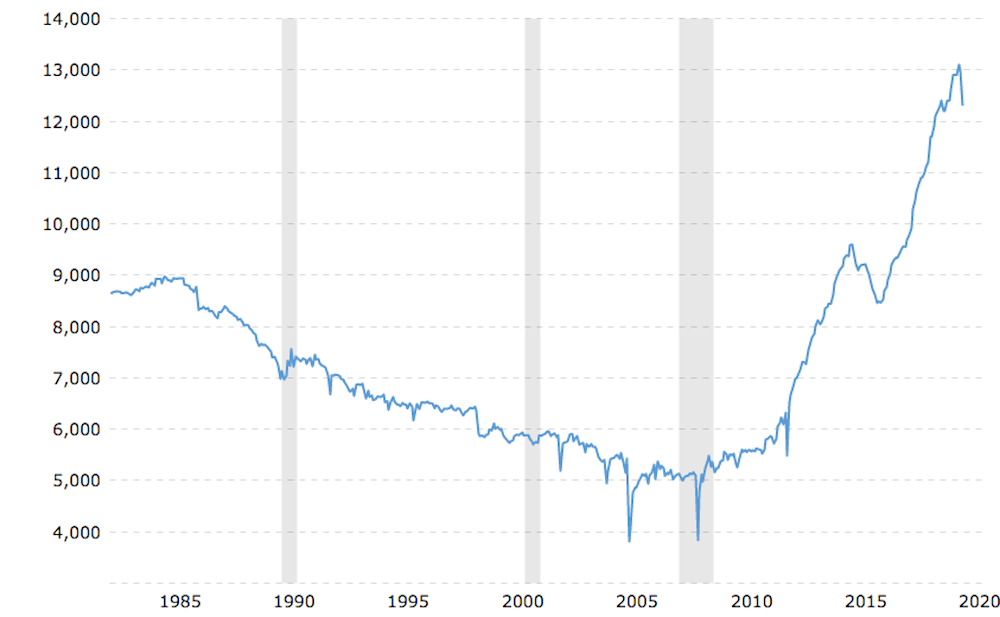 Even “normal” onshore drilling looks challenging today, with over two-thirds of Texas wells uneconomic at prices below US$25 by some estimates. Rigs are shut down as there is
nowhere for oil to go, globally. The value of US energy companies in the S&P 500 has halved in 2020 to US$633 billion, less than half that of
Microsoft. Research firm Rystad Energy predicts up to 533 bankruptcies by the end of 2021 if WTI prices average US$20, a massive increase from 2019. So where do things
go from here?

The road to Black April

Opec, led by the Saudis, controls substantial portions of global oil. It tries to set oil prices by raising or cutting production. For the past three years, Opec has been making
these decisions in a formal alliance with Russia and other nations that is known as Opec Plus. 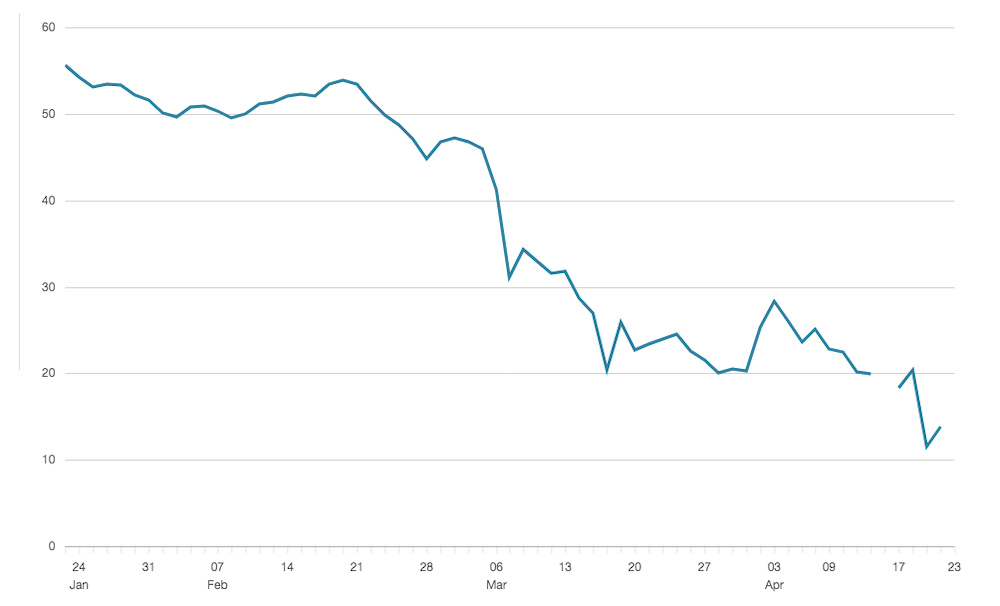 To some, the Russians and Saudis were playing a “good cop, bad cop” routine to drive US shale out of business, with the Saudis playing protector of global prices and the
Russians, wounded by US economic sanctions, refusing to play ball. Either way, both have much to gain by knocking out pricier US shale. Meanwhile, China has been buying up
Saudi and Russian oil on the uber cheap, while delaying on promises to buy US oil.
Some say the Saudi-Russia price warriors miscalculated America’s response. President Trump used threats like hefty oil tariffs to secure a new Opec Plus deal to cut production
by 10% on April 12. This was bolstered by production cuts from other G20 countries. Yet prices kept falling, arguably the deal was more about allowing Americans to save face
rather than seriously committing to production cuts, and therefore higher prices and stability. With a sniper’s precision, some believe, Saudi oil tankers are timed to reach New Orleans in May to unload a 50 million barrel “oil bomb” into Saudi-owned US refineries. There is precious little space for existing American crude, much less
Saudi imports, hence the April 20 historic price drop.

Uncle Sam to the rescue?
Trump has said the US is devising a rescue plan to save its oil industry. As part of its US$2 trillion stimulus package, rescue moves could even include buying stakes in firms,
though negotiating with congressional Democrats looks difficult. An alternative is to “virtually” buy more US oil and await better days, paying production companies to keep it in the
ground – possibly by designating this part of the US strategic petroleum reserve. This would help contain jobs devastation and help Trump in vote-rich Texas and other key areas,
while pleasing contributors to his campaign war chest. Another option is retaliatory tariffs on Saudi oil refined in America, or even a full ban.Oil companies are restructuring hastily – assessing the value of reserves and asking creditors for debt waivers. The US government has helped by extending companies’ ability to offset losses against future tax liabilities, which can make them more attractive to buyers. Nonetheless, some companies sitting on the priciest oil will get liquidated. In other cases, big creditor banks could take
over businesses, or demand mergers and acquisitions, including consolidations.
The biggest uncertainty is how long until the oil price rebounds? With the economy only likely to reopen gradually, demand will stay low for some time while supply remains too
high. The futures markets expect WTI to bounce back to the high US$20s by the end of the year, but don’t foresee a return to even US$40 oil until December 2024. How much US shale oil is worth saving in these straitened circumstances is key. Some estimate as many as 70% of firms will go out of business overall, with some never coming back until oil stabilizes above US$50. Others may be taken over by companies prepared to wait for higher prices. As oil historian Daniel Yergin says, “Rocks don’t go bankrupt”. US shale is in a sort of death pageant and will probably remain that way for the foreseeable future.

Author
Jorge Guira
Associate Professor of Law and Finance, University of Reading
Disclosure statement
Anne Fishel does not work for, consult, own shares in or
receive funding from any company or organization that
would benefit from this article, and has disclosed no
relevant affiliations beyond their academic appointment.